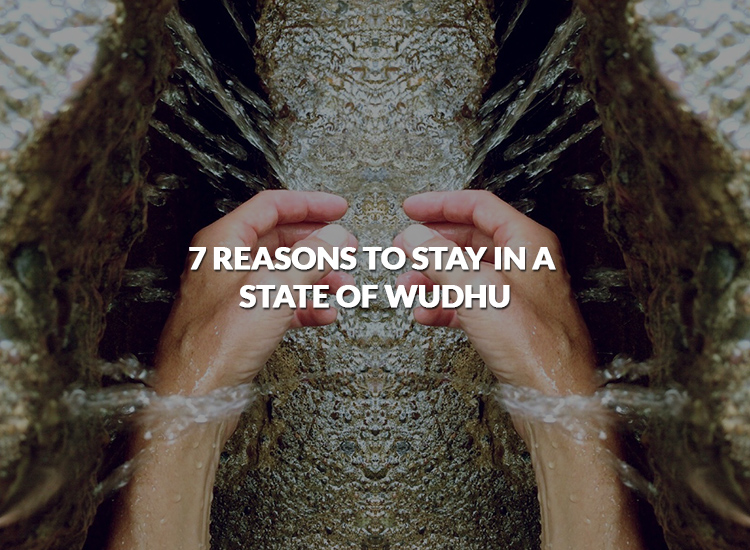 7 Reasons to Stay in a State of Wudhu

Muslims have to perform ablution or wudhu before they pray. Ablution requires one to wash their hands, faces, feet and to wipe over their heads in the order taught by the Prophet of Allah, Muhammad (sa).

Wudhu just doesn’t purify us for our salah! It provides several benefits for the Muslim! Here are 7 reasons why we must make wudhu in the best way possible and to stay in this state the entire day!

2) Stamp of the Ummah of Muhammad (sa)

Abu Huraira (ra) reported: The Messenger of Allah (sa) went to the (Baqi`) cemetery and said, “May you be secured from punishment, O dwellers of abode of the believers! We, if Allah wills, will follow you. I wish we see my brothers.” The Companions said, “O Messenger of Allah! Are not we your brothers?” He said, “You are my Companions, but my brothers are those who have not come into the world yet.” They said; “O Messenger of Allah! How will you recognize those of your Ummah who are not born yet?” He said, “Say, if a man has white-footed horses with white foreheads among horses which are pure black, will he not recognize his own horses?” They said; “Certainly, O Messenger of Allah!” He said, “They (my followers) will come with bright faces and white limbs because of Wudhu’; and I will arrive at the Haud (Al-Kawthar) ahead of them.” [Muslim]

3) Adornment of the Believer in Jannah

The Prophet (sa) said: “The adornment of the believer (in Jannah) will reach the places where the water of Wudhu reaches (his body).” [Muslim]

4) Entrance through any gate of Jannah

The Prophet (sa) said, “Whoever of you performs Wudhu carefully and then affirms: `Ash-hadu an la ilaha illallahu Wahdahu la sharika Lahu, wa ash-hadu anna Muhammadan `abduhu wa Rasuluhu [I testify that there so no true god except Allah Alone, Who has no partners and that Muhammad is His slave and Messenger],’ the eight gates of Jannah are opened for him. He may enter through whichever of these gates he desires (to enter).” [Muslim]

The Prophet (sa) also said, “… and no one preservers their wudhu except a Believer.” [Ibn Majah, Sahih]

The Prophet (sa), “Shall I not tell you something by which Allah effaces the sins and elevates ranks (in Jannah)?” The Companions said; “Certainly, O Messenger of Allah.” He said, “Performing the Wudhu thoroughly in spite of difficult circumstances, walking with more paces to the mosque, and waiting for the next As-Salat (the prayer) after observing Salat; and that is Ar-Ribat, and that is Ar-Ribat.” [Muslim]

Allah says in the Quran, “Truly, Allah loves those who turn unto Him in repentance and loves those who purify themselves (by taking a bath and cleaning and washing thoroughly their private parts, bodies, for their prayers, etc.).” [2: 222] What more can one want than the love of Allah!
Make it your habit to constantly be in a state of wudhu. Remember these ahadeeth and ayah during cold days to motivate yourself to follow this sunnah!

Ruhaifa Adil is a mother of four, a practising Muslimah, an avid reader, and a passionate writer. She works primarily as a trainer for mothers and teachers, advocating a multi sensorial, learner-centred approach, which she has learnt through her work as a remedial specialist for children with dyslexia. She is also an author of English textbooks, based on the teachings of the Quran (currently under editing), and creative director of a Tafseer app for kids.