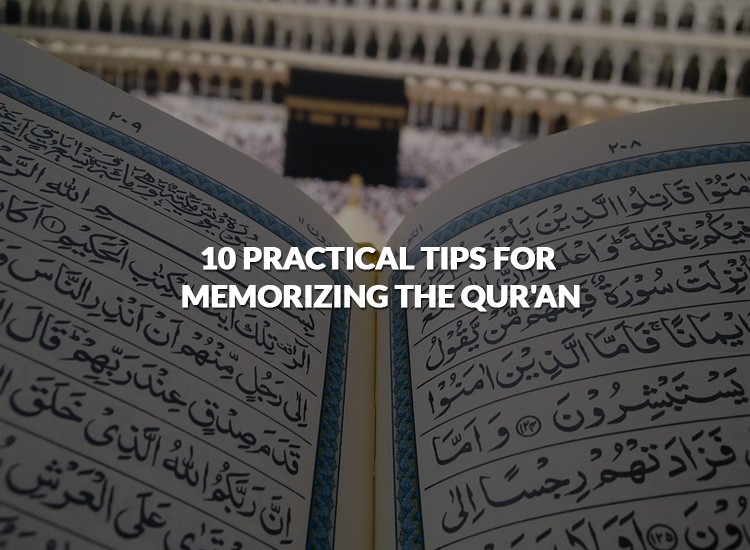 The Qur’an cannot be learned without a teacher. Even the messenger of Allah learnt from angel Jibreel. similarly, the Allah’s Messenger taught the Quran and listened to it from his companions. A good teacher will not only correct one’s recitation but also teach the correct tajweed and the rules. Qutor.com has a great list of tutors who can teach you online.

Set a daily quota of verses that you intend to memorize. This may be different for everyone, according to their situations. But a deed that is done consistently is far more beloved than one that is done in excess but not continued. Make sure that your learning is perfect, otherwise reduce your goals so that whatever you learn is memorized by heart.

An important thing that greatly aids the process of memorizing the Qur’an is to understand the meaning of the verses one is memorizing, and know how they are linked to each other. Read the explanation of the verses and bring their meanings to mind while you are reciting them to aid in a stronger memorization.

4- Revise throughout the day

A great way to constantly revise the lesson of the day is to recite in one’s salah five times a day. Other great times to recite and revise is in the car on the way to school/work, before sleeping, waiting at any other place such as the doctors , and so on.

5- Watch out for similar (analogous) portions of the Qur’an

Some parts of the Qur’an resemble each other in meaning, wording, or repetition of verses. Out of the 6000 verses of the Quran, approximately 2000 carry some sort of resemblance to others, either being completely same, or differences of one letter, a word or two, or more. Give special attention these so that you do not stumble at these places and makes mistakes.

6- Select one copy (Mushaf) of the Quran

A hafiz should have a specific  copy of the Quran from which he reads all the time. Visual image of the page leaves an imprint in the mind, making it easier to recall.

7- Recite it in a beautiful voice

Beautify the recitation as much as you can, and read it with melody. It is pleasing to one’s ears, providing incentive to continue with the memorization.  It helps make one’s memorization firm and strong because any mistake will ‘sound’ incorrect as it will distort the harmony of the rhythm one is used to.

It is very common for one to make mistakes in memorizing a Surah, without realizing it – even when one looks at the Mushaf. Have a companion or teacher who can listen to your recitation. This companion be a precise memorizer himself and there is a great list of tutors on Qutor.com who would be very valuable companions for this task.

9- Constantly review what has been previously learnt

Ibn `Umar (may Allah be pleased with him) quoted the Prophet (peace and blessings be upon him) as saying, “The likeness of the one who memorizes the Qur’an is that of the owner of a hobbled camel. If he tends to it regularly, he will keep it, but if he lets it go, he will lose it.” (Al-Bukhari).
One must review whatever he has learnt of the Quran. This should be not less than 1/30th of the Quran , and should not exceed ten Juz of the Qur’an, because Allah’s Messenger (sa) said  “It would be difficult for anyone who recites the (full) Qur’an in less than three nights to comprehend it.”

Last but not least, make the intention purely for the sake of Allah.

Amina Samir is a student of the Quran and a homeschooling mom of a ten-year-old Hafiz-to-be.