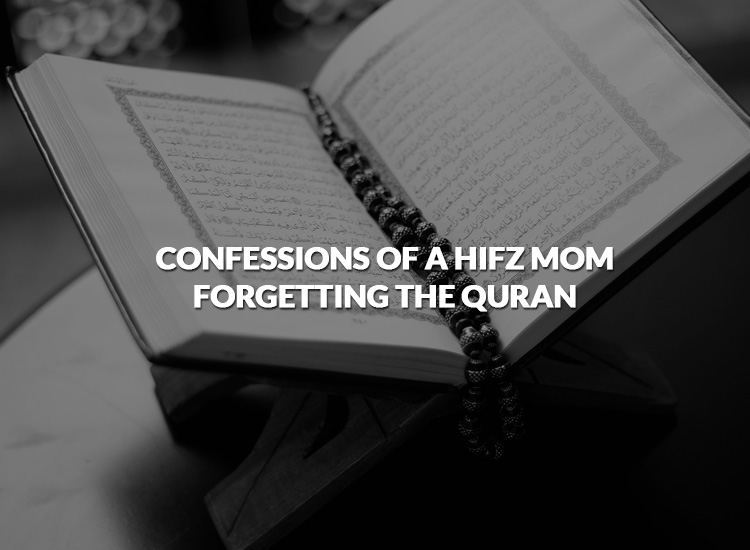 Confessions of a Hifz Mom – Forgetting the Quran

Possibly what scared us the most when our family embarked on the journey of Quran Memorization is the sin of forgetting what our children had learnt. Well-wishers tried to dissuade us from what we had decided for our daughter saying that once she gets married and has her family, she will not be able to revise what she has learnt and will forget it, and this will instead take her to Hell-fire. Scary images of punishments were painted before us and we wondered if we were doing the right thing.

However, when I read this quote by a well-known scholar, “Undoubtedly forgetfulness is something that is natural in man, and man is only called insan because of his forgetfulness.” I knew our Merciful Allah would not burden man beyond his capabilities and hence I set out to search the truth and this is what I uncovered.

1- To rememorize it is so hard, that it is better not to forget!

The Messenger of Allah, peace and blessings be upon him, urged us to read the Qur’an regularly lest we forget it. He warned us against being negligent in this regard, as was stated in numerous Hadith, including the following:

Ibn `Umar (may Allah be pleased with him) quoted the Prophet (peace and blessings be upon him) as saying, “The likeness of the one who memorizes the Qur’an is that of the owner of a hobbled camel. If he tends to it regularly, he will keep it, but if he lets it go, he will lose it.” (Al-Bukhari)

This wonderful analogy has been given to us to make us realize that taking out time everyday and reviewing the Quran is much better than forgetting it because as can be imagined, recapturing a camel is harder than being careful to make sure it is tied up! If the person who memorizes Qur’an does not regularly review what he has memorized, he will lose it and will require a great deal of effort to get it back. This is the reason that most teachers tend to narrate punishments for forgetting the Quran so to encourages us to constantly review what we have memorized and to keep on reciting it, lest we forget it.

2- Certain hadith on this matter are weak

The Hadith reported by Anas Ibn Malik (may Allah be pleased with him) which quotes the Messenger of Allah, peace and blessings be upon him, as saying, “The sins of my Ummah were shown to me and there is no sin greater than that of a man who was given or was helped to memorize a Surah or an Ayah of the Qur’an and then he forgot it.” is a weak or da’eef Hadith, according to Al-Bukhari and At-Tirmidhi.

3- Still, it isn’t a game to memorize and then forget

Even though the hadith is weak, it is not a game to memorize the Quran and then forget it. Once when one has undertaken the task of memorizing the Quran, they should be serious about it. They must not let the Quran escape their heart because it shows a negligence on their part and shows that their heart it no longer attached to the Book of Allah. A person should fear and dislike that he forgets the Quran. Fear of forgetting it will make a person keen to make sure that he keeps reciting and revising.

4- Forgetfulness is a blessing from Allah

If it were the case that man could learn something and never forget it, he would not need to read it frequently or revise. By having to revise and review the Quran regularly, one gets rewarded for every letter of every word recited!

5- Trying your best to remember is the key

If one strives hard to review the Qur’an regularly, there will be no sin on him even if he does forget some of it, for Allah sees the effort. The blame is on those who neglect the Quran and fail to review it and read it regularly.

Is it better then to not learn at all rather than forget? Let’s put it this way: the blessings of memorizing the words of Allah and the barakah it brings to the life of a Muslim cannot be beat! My advice would be to memorize as much as you can even if it is an ayah and review it every day, for the Quran will be a great companion to have in the grave and on the Day of Judgement.