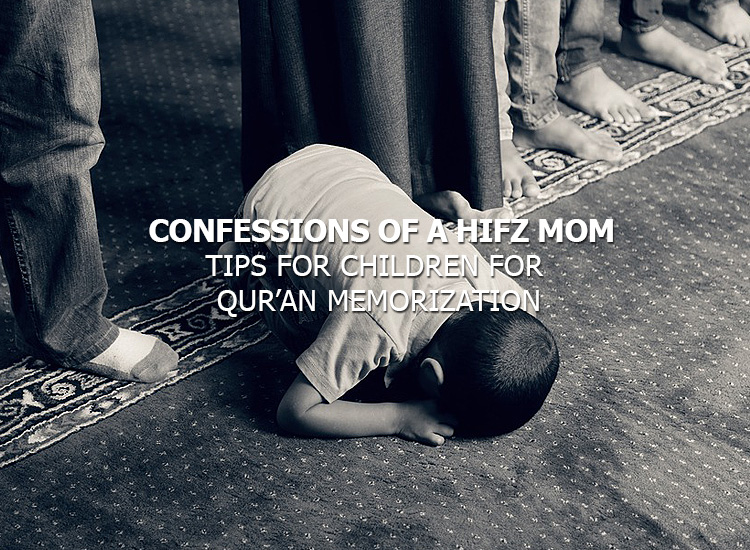 Every parent dreams the best for their child. They wish that their children do better than them, in this world and in the next. We were no different. We desired eternal success for our children and this hadith was an answer to what we were seeking – helping our kids to memorize the Quran would give our children a way to get to the highest place in Jannah. And so we embarked on our journey!

Here are some tips to help you start your children on the journey to learn the Quran, that we have learnt along the way:

1. Model What You Want Your Children to Emulate:
Children learn most from their parents actions than their commands. Engage yourself with the Quran, try to memorize parts of it yourself and you will notice that your children will take more interest in picking up the Quran themselves. Actions speak louder than words!

2. Create the Desire
We saw around us many children who were memorizing the Quran unwillingly. We heard stories of children who had forgotten parts of the Quran and those who had unhappy association with the Book of Allah because they were coerced and pressurized by their parents. This was certainly not what we wanted to we tried to create a desire in our children’s hearts for the Book of Allah. We related to them the many rewards, let them watch videos of young children who have memorized the Quran, and told them about the huffaz at the time of the Prophet (sa) so that the desire to learn was cultivated within them.
Not that there aren’t times when we’ve had to force them to pay attention, or to get goals completed, but the choice to memorize the Quran lies with the children themselves.

3. Provide the right environment
It is hard for the Quran to exist in the heart when the mind is occupied with music, televisions, cartoons etc. It is the job of the parent to create an environment conducive to learning the Quran by keeping their children away from negative influences, and providing them the opportunity to go regularly to the masjid, meeting good Muslims and pious people and attending gathering where they can learn about the deen. A hifz family is different than a normal family!

I read these lines of poetry written by Imam Shafi’ in a blog online and they have stayed with me since:
I complained to Wakee‘ about my poor memory:
Give up your sins! was his advice to me;
For knowledge is a light from divinity,
And the Light of God is veiled by iniquity.

4. Pacing is Everything
Some children can learn 4 pages every day. Others struggle with three lines. Every child is different. Pace your child according to his level. Do not put a timeline on when the hifz needs to finish. Even if it is a lifelong task, remember quality is better than quantity. Let your children learn with love in their hearts rather than stress.

One of my children struggles more than his sister and brother. But he knows that the Prophet (sa) said: “Such a person, who recites the Qur’an and masters it by heart, will be with the noble righteous scribes (in paradise). And such a person, who exerts himself to learn the Qur’an by heart and recites it with great difficulty, will have a double reward.” (Bukhari)

5. Revise and Review
Give your children the opportunity to revise and review, even if means putting a stop to learning new sabaq (lesson). It is very easy to forget the Quran and hence the Prophet (sa) advised us: “Keep on reciting the Qur’an, for, by Him in Whose Hand my life is, the Qur’an runs away (is forgotten) faster than camels that are released from their tying ropes.” (Bukhari)
This is easier said than done. But that’s when mom needs to step in and make sure it is done!

6. Provide Incentives
Gifts, hugs, appreciation, reward charts, stars, milestone charts, reward jars are all great ways to get the kids motivated. Insha Allah I will write a separate blog on this since this needs to be handled carefully to not make the kids materialistic yet needs to be done because they are kids and need concrete rewards to keep them going.

7. Some other Ideas
Read about how to create a connection the Quran here and making use of technology here. Online learning sites such as Qutor are also great tools to help you organize your child and yourself

A word of caution: I am sure you have either heard of this or read this hadith, ‘Whoever reads the Qur’an and memorizes it, Allah will admit him to Paradise and allow him to intercede for ten of his family members who all deserved to enter Hell.’ This hadith is weak and should not be narrated to your children.

May Allah make us and our children amongst those who memorize His Words and may He grant us the highest place in Jannah with our families. Ameen