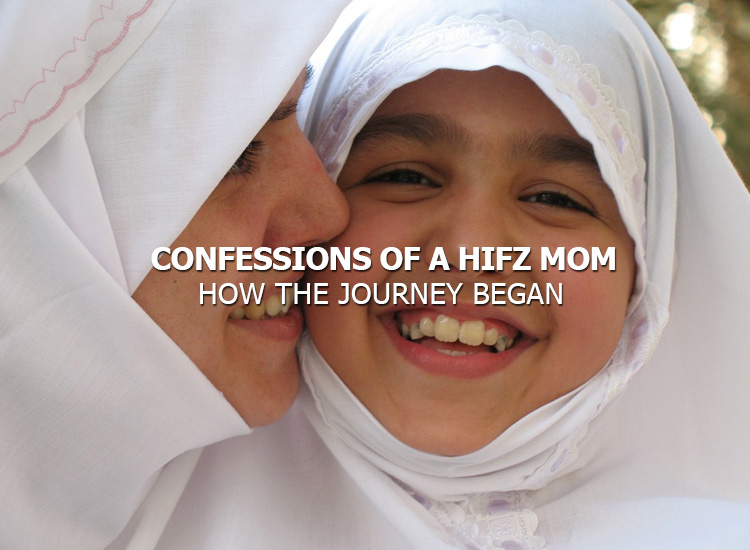 Confessions of a hifz mom – How the Journey Began

I still remember that day so clearly when a meeting for the parents was called by the Islamic school my kids attended. They had called us to ask which parents would be interested in enrolling their kids for Hifz. My husband and I looked at each other. Our daughter was 6 years old at that time. We wanted her to give it a shot and then we would take it from there – if she was able to do it, we’d go for the long haul; if she could not or the pressure was leading her to dislike the Quran, we would discontinue. So we signed up.

I did not want to tell my daughter that we had signed up for the classes and she could see how it goes. That sounded as if I was already telling her to quit. I also wanted to convey to her what a special thing it was for her to be doing Hifz – that she would be ranked amongst a very select group of chosen individuals if she did complete her memorization. What a special day that would be!

So I sat my little girl down and told her that Allah chooses only the best of his people for special tasks such as Hifz. I asked her if she wanted to be special. With wide eyes, she said yes. I guess all girls, young or old, like the word ‘special’! I told her to make dua that Allah chooses her for doing hifz, for memorizing His words. I told her about how with every word she would recite, she could keep moving upwards into Jannah, where each level was more spectacular than the last; where even the bottom most level was infinitely grander than anything we know in this world.

The next day when I went to pick her up from school, she ran to me and said, “Mummy, there is a list with all the names of the kids who were chosen for hifz. Did Allah choose me?”

The two of us walked over to the list of the students whose parents had signed up. She read each name going down the list, showing off her newly acquired reading skills. Two-thirds of the way down, she read her name. I cannot forget how she jumped with excitement. My little girl, eyes as wide as saucers, dreams as large as the universe was thrilled that she was ‘chosen’ by Allah.

Even though it was us who had signed her up, she wasn’t far from the truth. Allah had indeed ‘chosen’ her to be amongst the huffaaz. It was only last month that she finished her Hifz Alhamdulillah. It took us longer than we expected because of the arrival of the youngest member of our family, and the subsequent lapse on my part in keeping up with her lessons. But all is well that ends well! We restarted the forgotten Juz and by the grace of Allah, my daughter not only finished her hifz, but also inspired her brothers to take on the challenge!

Hifz isn’t Fardh (obligatory). But I cannot vouch enough for the amazing benefits that the Quran brings into one’s lives. My children are able to make connections, reason and understand above and beyond their age. They are able to make connections within the Quran and the message of Allah. When they listen to lectures, they are better able to make sense of them. Not only that, by the blessings of the Quran, opportunities and ease comes in whatever they do.
Complete memorization may not be for your family. But definitely guide your children to memorize parts of the Quran. And let them to know they are special and they have been chosen by none other than Allah!

[As the author was writing this blog, she received a message from the Wifaq-ul-Madaris (the examination board every Hafiz has to sit an oral exam with to qualify as a Hafiz). Her daughter scored a 100%, Alhamdulillah. BarakAllahu fi ilmiki wa amaliki]